Today we were both up before the 7:00am alarm. This is because a duck under our window would not shut up at all. It kept honking and honking. I got up to yell at it to shut up and I see three more ducks round the corner of the building coming towards the lonely duck. He then shut up, so I guess he was calling his friends.

I went to go get back in bed but the alarm went off right after I got back in. Instead of sleeping some more we got up and packed a bag for the day with water, towels, sunscreen, and a little bit of tipping money. Then it was time to get dressed and put sunscreen on ourselves.

After we were ready we headed off to breakfast. Today we decided that it would be best to share an omelette because neither of us finished yesterday. We also had room for some fruit and veggies on our plates. I was excited for the steamed carrots I had found. Turns out they were not steamed carrots but canned carrots that have a strange not quite pickled taste to them. Neither Amber or I could eat them. I once again had all the guava I could stomach.

After breakfast we went up to the lobby to wait for the bus to pick us up and take us on our catamaran adventure. I thought the ticket said to be up at the lobby at 8:10am, so we thought the bus was a bit late but we checked the ticket and it said 8:20am so we waited patiently for the bus. It arrived at 8:30 but already had lots of people on it. I’m glad we weren’t the first pick up spot, less time on the bus.

That was good because the bus stopped at two more places and then it was a 30 (ish) minute drive out to the marina to get on our Catamaran.

There were two Catamarans waiting at the marina. We ended up on the smaller one, I hope that means there were less people because it was slightly crowded. Once we were all settled (Amber and I on the roof to get some sun) the boat took off. As an experiment Amber leaned over the edge of the roof and asked the bar-tender for some Cuba Libres. Turns out you can still get drinks like this. One thing about drinks on the roof is that if the wind dumps one over you are likely to hit, or in this case almost hit, the people and/or their possessions that are seated below you. No damage done and no enemies made, luckily.

Shortly after that we arrived at the first snorkelling spot. Unfortunately due to high wind we were on the not as nice side of a rock wall. The rock wall gave us shelter but the nicer and deeper snorkelling was on the side of the wall we couldn’t go on. The wind and waves would have easily pushed us into the rock wall we were using as shelter. The snorkelling wasn’t bad where we were. We had lots of colourful fish and corals to see. The water was a nice depth that we didn’t have to worry about touching anything on the bottom.

The snorkels that had been bought new for each person, and could be taken as a souvenir, were not the best. They seemed to take on water from somewhere. I’m not sure if they were short and kept taking on water from waves or if there was a small trickle between the soft plastic of the mouth piece and the hard plastic of the spout. What I do know is I had to keep stopping to spit out very salty water. We also took a long time getting into the water because everyone was searching through two large bins for flippers in the correct size. They lad lots of large ones for men but almost none for women. There was a bin of very short, mostly useless (I later learned), flippers that came in smaller sizes for women and children.

After snorkelling we boarded the boat. As we boarded we saw one of the boys had gotten seasick and was throwing up off the back of the boat, poor thing. We went back to our spot on the roof and tried to get some sun and dry off. It was great when the sun was out but cold when the sun was behind the clouds.

The second snorkelling spot was near the island where we were going to have lunch. Because of this we stopped to let some of the people (especially the seasick ones) off the boat to stay on the island before lunch. The rest of us stayed on the boat and went snorkelling for some time. This area had similar fish and coral to see. It was also very shallow so you had to be cautious not to step on or kick any of the corals. 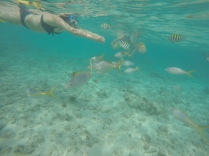 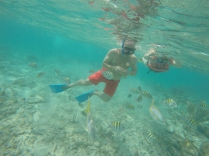 After snorkelling we boarded the boat and returned our gear while we drove back to the island dock to land for lunch. On the island we all left the boat and followed a board walk to a small building, it was the only building on the island. There was a buffet table set up for people to grab lunch from. There was bread, veggies, and rice to have. There was also a guy serving protein for lunch. You could have chicken, lobster, or prawns. You could also have a piece of each, so that is what Amber and I did. It was a little over cooked but not bad and it was nice to have a change in menu.

We took our lunch to some picnic tables that were set up on the grounds. From there we could see that the island was populated with chickens, hopefully not the ones we were eating, and rabbits. Both animals wandered the island freely, or ran in terror from the tourist children.

Amber and I used the remaining time on the tiny island to walk it’s beaches. We crossed the island through bush in only a few dozen steps. It was truly a small but beautiful island.

When the whistle blew you could hear it all across the island. That was our queue to head back to the boat. When we boarded the boat we decided to move from the roof of the boat to the nets suspended on the front of the catamaran. There was a nice breeze and lots of sun in this position. The boat ride wasn’t very long because we were headed to Pilar Beach. This is said to be the nicest beach on the island of Cayo Coco.

Though the beach is very nice I found it to be very similar to the beaches out by our hotels. The only large difference is that the beaches at Pilar must be cleaned of seaweed each morning. The hotel beaches have it tide line of seaweed and Pilar did not have one.

The catamaran stopped quite close to shore. So close in fact that people swimming in the water began to worry and swim back to shore. We never did go that close to shore though, only to the pre=made anchor.

We were given time to swim in the waters of Pilar Beach but told not to go into shore, that the tides would make it hard to swim back to the boat. I’m sure this maybe true for some people but Amber and I are both strong swimmers, we made it to shallower water. It took some work to get there though, not because the swim was hard but because the water was so cold, I was reluctant to get in again. I don’t know why it was so cold there. I don’t recall the water being cold where we snorkelled. I did make it into the water for a swim though.

After we were summoned back to the boat we again road in the nets back to the Marina. When we returned to the Marina I was happily surprised at how not fried I was. I normally burn like a lobster pretty quickly. We had been diligent about sunscreen though and aside from a few small strips on our bellies neither Amber or I was especially burned.

We made it back to the hotel around 4pm. Lunch had been hours ago and we were starving. The buffet was closed until 6:00 though. Thankfully there is a 24hr snack bar. We headed there and had a hot dog. It wasn’t the best hot dog I’ve ever had, but at the time I thought it was the greatest thing ever.

After our snack it was back to the room to shower off the sea water. I let Amber go first just so I could sit around with conditioner in my hair for 20 minutes. That trick may not really work but I believe it helps.

We’d already had a day full of sun and water so we elected to stay in the room until dinner at 6. We used to time to plan outfits for our excursion that night. We had booked tickets to a cave bar that night. Maybe we were stretching ourselves thin that day but other then the spa we had nothing but sleeping and enjoying the sun planned for the rest of the trip.

Dinner was at 6pm and then it was back to the room for a nap. I knew I’d never stay up until 2 or 3 am otherwise.

4 thoughts on “Sun, Sea, and Catamaran”