I took the bus from Leipzig, Germany to Sofia, Bulgaria. The trip took roughly 24 hours. I did it because it was the cheapest option. It was an adventure. The bus drove through Germany and into the Czech Republic, then into Slovakia and Hungary.

But first I had to find the bus stop. I was in Leipzig with Maria, a friend that I had met at the dig in Brietenbach, and that was lucky for me. She took me to where the website said the bus picked up and left me her phone number in case anything went wrong. I waited about an hour for the bus but I never saw it or any other people trying to catch the bus. So I phone Maria.

Maria came to get me and we went to the ticket office in Leipzig. She spoke to to woman at the counter and was informed the website had the wrong information, the bus picked up somewhere different but it had left for the day. All they could do was issue my ticket for the next day. I was pissed but relieved that I had Maria there to help me.

She let me stay at her place. She took me on a small tour of Leipzig and then she had had plans to visit her grandfather so I went with her. She had to translate but he was a very nice man who easily accommodated me in his dinner plans with his granddaughter.

After dinner we went out with some of Maria’s friends and smoked shisha and sang karaoke. Then we returned to her home for the night and then next morning she took me to the correct location where the bus would pick me up and I was on my way to Bulgaria.

Then we continued on our journey until we reached to city of Sofia. I have an unfair bias against Sofia. I tripped on the uneven cobblestones and went down with a 20kg bag on my back. I ripped my knee open and ruined my most comfortable jeans. I decided that I hated the city and wanted out. I spent most of my time there in the hostel because it hurt my knee to walk on it too much. 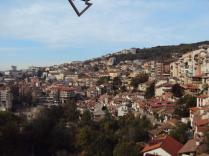 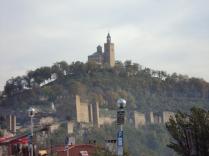 I was headed to Veliko Tarnovo, a university town, to volunteer at the Loft Hostel. I found the opportunity to work their on a website called HelpX, it joins travellers with volunteer jobs. Some are on farms, in hostels, on boats, as nannies, and other unique opportunities.

After a walk up, up, up I managed to find the hostel. The Loft Hostel is run by a young couple. She is American and come to Bulgaria with the Peace Corp, he was a local man from a village just outside the city. There was another older man working at the hostel also. He spent most of his time downstairs at the bar.

My job was to check travellers into the hostel. Because we were small and didn’t have to many visitors I had cell phone and I could wander around town and I would get a call when people wanted to check in to the hostel. I also put out breakfast, cleaned the hostel and did laundry. I spent time at the beginning talking with the owners and getting to know Robert (I don’t actually remember his name).

Robert and I talked a lot about where we had travelled before and where we would like to travel to in the future. I talked about how I was thinking of going to Greece after but wasn’t sure when yet. He talked about places he had travelled in Greece and offered to show me around. I told him that I had no idea about my plans but would let him know (I naively thought he was concerned because I was young and travelling alone).

I enjoyed my work at the hostel. It was near to a farmer’s market so almost everyday I went to get fresh local foods. It was so much cheaper than the supermarket and it forced me to learn some Bulgarian (all of which I have now forgotten). There were lots of small streets with cafes and shops, especially in the university district.

On my off days I would find an internet cafe or I would go with my hosts into his small village and work with his family in the garden or cooking meals. This is also where I saw the making of Rakia (Moonshine) for the first time. This alcohol is the stuff that people tell you will make you blind. It’s so strong and the flavour is horrible and overpowering, it burns so much.

I also worked with one of the men in the village. He wanted to make activities that people at the hostel could do, fishing trips and horseback riding. I would go on trail rides with him to let him know what I thought of the ride and how I thought it could be made a better experience for other people. It was at his home that I first ate horse meat. They only told me what it was after I had finished.

Most people would think this is a horrible thing to do. In Bulgaria many people are poor and live on what they can grow and trade for. When a horse needs to be euthanized it is taken to be slaughtered and then the meat is shared with the people of the village. For them this is a much needed intake of protein. It doesn’t taste bad either. It’s meat our aversion to it is that we think of horses as pets and not food.

I celebrated my birthday at the hostel. Robert bought me a pair of amber earrings. They were a kind gift but it felt weird receiving them. As time passed Robert was wondering more and more about my plans to travel to Greece. He began speaking about getting an apartment there for a while and would tell me that he would take care of me. I was creeped out by this and would always insist that if I was going to travel Greece I was going to move around a lot, stay in hostels, and meet people.

He asked why I wouldn’t be happy with that. I told him the idea that he would be paying me to be in a relationship which made me completely uncomfortable and a little sick. I told him that I was 23, my father was in his 40’s, my grandfather in his 60’s and he was closer to my grandfathers age that to my fathers. I wasn’t going to be in a relationship that made me question myself or my values.

I was at the bar downstairs and had to tell the owners of the hostel what had happened and why he left. The bartender told us that he has to leave the previous city he had been in because he had gotten his 18 year old girlfriend pregnant and her father wanted to kill him. Turns out he was into much younger women. 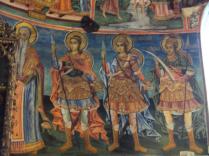 I spend Christmas in the village with everyone and the next day I had plans to catch the overnight train to Istanbul, Turkey. First I had to get the train though. I got a ride to the Veliko Tarnovo train station but was told that due to weather the train had to be re-routed and I could catch it next town over. Luckily my hosts were kind enough to drive me to the train rather than leave me to wait for the next one.

I was told to book only a seat on the train and then speak to the conductor about up grading to a sleeper because he would find me a space, charge me less, but pocket it all, so I did. He asked who I was travelling with and when I told him I was travelling alone he found an empty 2-bed couchette and told me to lock the door, I would have the room alone. Total win for me.

Then the train was off into the night to take me to Istanbul.

One thought on “Bulgaria”