Breakfast was a 7am in the hotel coffee shop so I woke up early and packed my day bag and my luggage to move out of the room. Then I went down for breakfast at 7am. I ate with Niko and Mohammed. When I finished I got the key to room 801 where we were keeping our bags and took my stuff up. Then it was back down to get on the bus.

The bus ride was just under an hour because of the traffic congestion in Egypt. There are cars everywhere and a three lane highway becomes a 5 lane highway as people drive between the lines. That means constant honking and merging and bottle necking. I think traffic would move faster if people weren’t driving with centimetres between them and the vehicle on either side. Egypt is not a place I want to drive.

The morning was foggy/pollutiony and my first glimpse of the Great Pyramid was hazy and obscured. It made me feel like this really was a dream coming true. We drove up a bit of a hill to the parking area of the Pyramids and got our tickets for entrance. Mohammed told us about the pyramids and the Pharaohs who had them build and how they get smaller as a sign of respect to the person (father) who came before.

There were so many hagglers and harassers at the Great Pyramid especially. Offering camel rides and cart rides for exorbitant fees. Later by the small pyramid you see a sign that tells you it should be 50 Egyptian Pounds for 30 minutes. But our guide was telling us that one of his ladies on a trip took a camel ride (after being told not to, they are scams at the pyramids) and the man took her to the desert and wouldn’t bring her back until she paid him 100US$. On our tour some people were not allowed off the camel until they paid that man more money. The lesson is if you want to ride a camel don’t do it there. Arrange to do a proper ride out in the desert.

We spent about an hour walking around the first two pyramids taking pictures and marvelling at the engineering and man power it took to build the pyramids. These are structures that have stood for thousands of years. I think it would have been amazing to be a powerful/wealthy person at that time.

We met the bus and it drove us up a little way to the smallest of the three pyramids. This pyramid we had paid to go inside, it was 40LE. You could have also gone into the Great Pyramid but it was 200LE and Mohammed said it was not really worth the cost. Going inside the pyramid you enter into this tiny shaft maybe 4 feet tall and you descend to what must be the base of the pyramid. There you have a small room that would have been the preparation room (for mummification and stuff) and the other room is the burial room.

Once we returned the bus took us to the panorama area where you can get pictures of all three pyramids together. We spent time there taking funny shots and even a few group shots. The fog had lifted by this time and it wasn’t to hard to see all three pyramids.

We boarded the bus again and headed for the Sphinx. Egyptians would like people to be very clear that the nose is not missing because Napoleon used it as canon practice. It was recorded missing as much as 200 years before Napoleon went to Egypt.

The sphinx was build in front of the second pyramid. It was built to be a guardian for the Pharaoh inside the pyramid. The sphinx has the body of a lion for strength and the head of a man for wisdom. The structure is 20m tall and 70m long. It was built from a large block of limestone and has previously been restored to help maintain it. 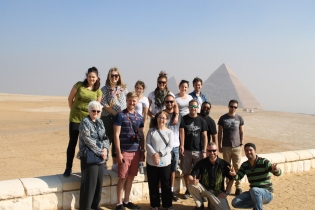 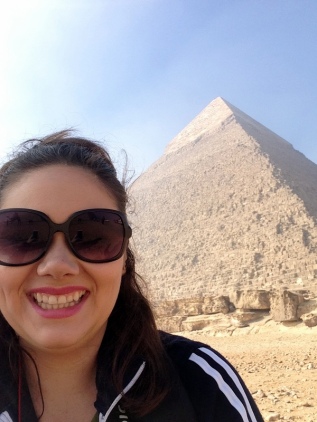 When we finished we took the bus to the Egyptian museum. We stopped on the way for lunch (Chicken Shawarma) and to see a demonstration on how to make papyrus paper. Then we could buy some if we wanted and it came with a certification that it had been made in the traditional way and was certified authentic by the Egyptian government. I guess most of the other stuff is made improperly and is not made of papyrus at all. Then we drove over the Nile River to get to the museum. Mohammed got us kitted out with head phones that he had a microphone for and could talk to us without disturbing others.

There are no photographs allowed inside the museum but they have thousands of interesting pieces in their collection. The have be ground floor organized from old kingdom to new kingdom. They have statues and papyrus paper. They have wall carvings and many amazing things.

When you go up stairs most of the collection is dedicated to the items they found in the tomb of Tutankhamen. There are chariots and statues and beds, beads and gold and weapons. The most famous piece in the collection is the golden mask of King Tut, this is 11kg of solid 24k gold inlay with glass and stones. You can also see his solid gold sarcophagi and the jars that hold/held his organs.
After we were given free time to wander around and see all the other pieces of the museum. They have a large collection of sarcophagi and the mummies that were in then. They have boats colossi statues. You could spend days wandering around but we only had an hour and we made the most of it.

After we headed back to the hotel to shower and relax before we took the bus to the train station. I was up in 801 and had just finished showering when Niko came back into the room and decided he wanted a shower. That would have been fine if the bathroom door had a lock but it didn’t. Luckily between Maddy and I yelling Niko got the point and didn’t walk in on me.

After we loaded our bags up on the bus we drove to the station to catch an 8:30 over night bus to Aswan. We stopped at a liquor store along the way. The station wasn’t too bad. As we waited we got so see some rail car riders who were on the outside of the train.

I was a single traveller and their is not other single female on the trip so there was a chance I could get a room alone but it was not to be. I had Teresa from at GoAway tour as my bunk mate. She was from Richmond, Vancouver just a few hours away from where I grew up. The was travelling as a 40th birthday present to herself. On her tour there were only two travellers.

Shortly after we boarded the train we were served a surprisingly yummy dinner. It had a quarter chicken with veggies, a side of potatoes and onions in gravy, butter rice, salad, a roll, and dessert. After we ate the conductor of our carriage came and changed our seats into beds.

I went wandering around to see the others in the train. We were standing outside of Tony and Niko’s room on the train chatting about ourselves when Jed walked past us in the hall with soap on this hands and a wet stain on his shorts. He looked a little lost. It turned out that he had hit the bidet button and not the flush, which was a foot peddle, and socked his pants. He had then soaped up to wash his hands only to find that there was no water in the sink. He was walking back to his room in shame to use the sink and a bottle of water to wash his hands.

We decided to try and get to car 9, The Club. As we walked to the back of the train we could quickly see that we were obviously in first class. The cabins became smaller and smaller as we made out way back. When we got to the door to enter car 8 it was locked/sticky/broken or some other thing that did not allow us to open it, so we gave up and returned to our rooms to go to bed.