My alarm went off at 3:15am. I dressed in clothes I had previous laid out, brushed my teeth and took the blanket off the hotel bed. We boarded the bus and i was lucky enough to get a bench to myself and the single seat was empty, so i laid out flat and put my blanket back over my head and slept till almost 7am. I woke to the sound of camera shutters. I got up to be able to take a picture of the sunrise. Then it was almost time to get up anyways. 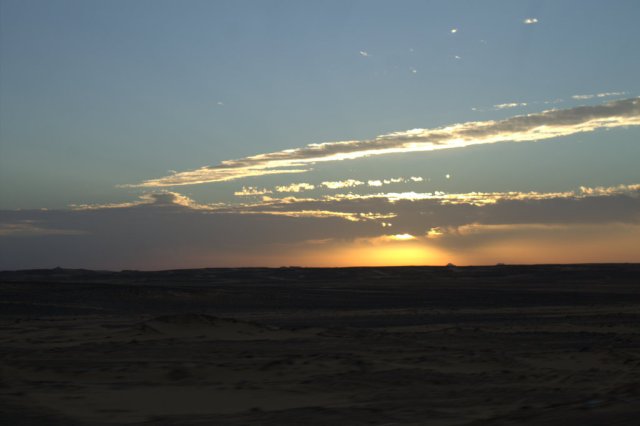 Our military convoy arrived around 8am. We were so early even the hawkers were still in bed. We learned about the two temples and how they had been moved to save them from the rising lake. We learned how much Ramses the Second need everyone to know he was virile by carving himself with a large penis, carving his chariot horses with large penises and even carving the Sun God Ammun’Ra with a, slightly larger than Ramses, penis.

We were told about how Ramses built the temples in the South to be able to show himself as a God in an area where there was no strong presence of other Gods, because it was Nubian land. Within the temple there are many great carvings but the best example of the Egyptians amazing engineering was the alter chamber. In this chamber Ramses had the statues of 4 figures build; the sun God, Ammun’Ra, Ramses himself, and the god of darkness. On two days of the year (march and October 22nd) the days of his birthday and coronation, the light shines in the room and lights up three of the statues leaving the god of darkness in the dark. When the temple was relocated in the 60’s engineers tried to maintain this phenomenon but were unable to do this and now the light shines in on the 21st of March and April.

The other temple in Abu Simbel is that of Nefertati, the wife of Ramses. Her name means the beautiful is coming and she was from the Nubian lands. But Nefertati was not the only wife of Ramses, only his main wife. Ramses had 90 wives and from those wives he had 92 daughters and 112 sons. Ramses lived to the age of 92.

On the façade of Nafertati’s temple there are two statues of Nefertati and on either side each statue is a statue of Ramses. This means on Nefertati’s temple she is there twice and Ramses is there 4 times as colossus statues.

We were given free time and the chance to go into the temples. Like other temples they are full of wonderful carvings. Ramses’ temple has many scenes depicting him making sacrifice to the gods, most commonly Horus. Ramses temple is quite a bit bigger than others with many extra rooms that are long and filled with detailed hieroglyphs and images. Everything at Abu Simbel is large and amazing.
One of the most fascinating things is that on the way out, after you make it past the hawkers who have woken up and arrived, is the small information centre that shows you how they cut the temples in 1040 pieces and moved them to higher ground. This is a case when the mountain has been brought to Mohammed.

We returned to the bus at 10am to depart with the military convoy returning to Aswan. I went to my seat and my blanket and once again slept for most of the trip. We returned to Aswan and the death trap hotel just after 1pm. We ordered Falafel for lunch and then had free time until dinner and the market that night.
Nikki, Touls, and I went up to the roof to sit in the sun and play a card game called Personally Incorrect. The game is like an offensive version of Cards Against Humanity. But in this game you insert the name of someone. We took turns using the names of all the people on the tour. They got up to some pretty nasty and scary things in the game.

Niko joined up later and we continued with the remainder of the deck of cards. After we just spent some time on the roof. We noticed that there was a little boy up there who seemed to be doing the laundry. Nikki noticed he put it on the dusty ground before putting it over the clothing line.

After we separated to have a bit of a rest before dinner at 6. I didn’t need a rest because I had been sleeping most of the day so I went to the lobby to see if anyone was awake and maybe using the internet. No one was down at the time so I went out for a bit of a walk to the store to get some treats.

At 6 we met in the lobby for dinner. It was our chance to go out and have the Egyptian dish of Koushri. This is a dish that has rice, noodles, and pasta as a base. It has chickpea, lentils, and fired onion on top. It is served with a tomato sauce to put on top and chilli and garlic oils to add for more flavour. Then everything is mixed together and eaten. One potion is 15LE or 3$. It was very good and something I could eat again and again.

After dinner we went to the market. We walked all the way down to the far end and then walked back towards the hotel. Mostly no one really had any purchases in mind. We were just there to see what struck our fancy.

Nikki decided that she wanted to get some sweat pants to sleep in for the Felucca because it was out doors and likely to be cold. The first shop we found wanted 50LE for them but was willing to go to 40LE. We went to the next place and it was 55LE but would go down to 45LE. I had seen a shop with priced in Arabic and we decided to wait until we got there to see what prices they had. When we found it they were advertised for 25LE so Nikki bought them without trouble. It highlights the difference between local prices and tourist prices.

A similar thing happened to Tony. He wanted about a dozen trinkets and the guy said they would be 530LE or over 100$. He put a few things away. When I brought up waiting because at the monuments items were shouted out for 1$ or 5LE the man said he owned one and that was just what people said to get you in the door but would change the price later. When Tony asked prices for things he wanted 35LE or 7$ for key chains and magnets, 120LE for some copper decoration. Tony put a few things away and bought a few for what I think was too much. Later we found a woman selling similar items for 10LE or 2$. So I didn’t even haggle just bough 5 items.

In the market we found a bakery with fresh bread and sweets like chocolate covered croissants. They were very good and we bought a few each to eat for breakfast because we thought the breakfast would be bread heavy and bad. We also bought some take with us as we travelled the on the Felucca. We eventually made it back to the hotel. We sat around in the lobby and chatted. We talked about life and the trip so far. We talked about the condition of the hotel and how bad and unacceptable it was. Maddy was so upset she was planning to write to Intrepid.

As we were talking they began/continued construction in the lobby. Generally we ignored it and kept talking. Soon it was becoming late and people started to go to bed. Finally at midnight Maddy was tired and tired of the noise. She went up and gave it to the men, letting them know we were all (the 5 of us remaining) waiting to go to bed and would they be done anytime soon. They told her 5 more minutes and just after midnight they stopped and we were able to go to bed. Luckily there was no early morning the next day and we didn’t have to be up until 10 if we wanted breakfast. If we didn’t want breakfast we had to be in the lobby at noon to head to the boat.