When we were leaving Ephesus we walked along the highway to go back to the hostel to pick up our bags. Right before we get to the hostel a car with a young Turkish couple pulls up. Where are we going? To Karacasu. Not a problem. But we need to pick up our bags. They stop and we load in our bags. The couple are going to Pamukkale, the white salt baths. This is also our final destination, can they take us the whole way? Not a problem. So the question is ‘Is it hitchhiking if my thumb wasn’t out?’. Leave your answer in the form of a reply.

The couple took us right to Pamukkale, about 150km. And we talk, she is a psychologist and he is… get this… a fighter pilot for the Turkish military. Our driver also fly’s F-16’s as his day job. His girlfriend had photo’s of him all suited up on her phone so we got to look at the flight suits and inside the jets. It was a very interesting car ride.

When we arrived in Pamukkale they drove a circle around town to show us the white cliffs. They called their hotel to see if it had room, it was booked. They stopped in the center of town and asked a man if he knew a hostel. Of course he did. He called a friend to come pick us up. The hostel was walking distance to the bottom entrance of the site, but also had a free shuttle to the top in the morning. Also free breakfast and TV’s in the room’s. All in all very nice.

It was only 6pm when we arrived, but by 7 it was time for a nap. The alarm was set for 8:30pm so we could go get dinner. I slept through it and Adam went back to sleep till 9:30. Then he went out to get dinner, because I did not want to wake up and went back to bed. Dinner was Turkish pizza, nothing like pizza we would recognise. Dough is rolled into an oval and olive oil is put on. Then toppings, thinly, cheese, egg, meat, peppers. Then the edges of the oval are folded over. It is half between pizza and a calzone. I will try to make it when I am at home.

After dinner it was almost directly back into bed.

It was 7am when I woke up. Adam was already in the lounge looking at flights back to Istanbul. As well as communicating with a factory in china that was producing his cloths. I got up and uploaded some photos. Breakfast was included for the first time in awhile, so we had eggs, tomato’s, cheese, sausage and chai for breakfast. I tried to upload photos from Ephesus, but we were told if we wanted to catch a free shuttle to the North Gate of Pamukkale we had to hurry. The guy even let us check out late so we did not have to pack, we could just grab the day bag and go.

When you walk in the North Gate you enter the Necropolis, the city of the dead. For more then a kilometre there is nothing but tombs and sarcophagi lining the hillside. Some have been excavated and are shown, some are still in the side of the hill waiting for someone with a trowel. 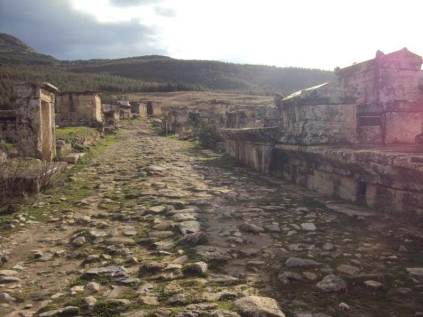 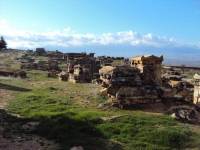 Next is a small theatre, unlike the others it is not up a hill, it is sunken into the ground. This could be because of erosion, or some other factors. There was the remains of an Agora and a Medieval church on the hill. This was the fifth or sixth set of ruins in three days, both Adam and I were becoming blasé about the ruins. It’s sad because it is a nice sight.

The ruins end in a large theatre, but you can not go to the bottom of the theatre, it is gated off for unknown reasons, which is sad because Adam has done an oration at each theatre we have been to. It terrifies the other people at the theatre, but is amusing. 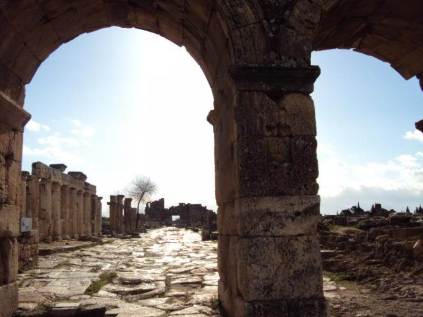 After the ruins is an area called the Ancient bath. This used to be a natural thermal bath that had healing properties due to the calcium and salt tin the water. Now it is false advertising. A complex has been build up and the pool smalls like chlorine not sulphur. There is no remnants of the bath left, but a small tourist pool with warm water. Also there is an extra charge of 12 Euros to use the pool. But you have already paid 10 Euros to get into the sight. Needless to say we did not swim in the ancient baths.

After that disappointment we were downtrodden. We thought that was the big pool, but walking further down we found the white salt cliffs that Pamukkale is famous for. Most of the cliff have dried up, or the water has been diverted elsewhere. Now what remains of  Pamukkale is a whitewashed façade, a tourist trap that uses what it used to be to exploit people for ungodly amounts of money. The pools that you can go into have been put in place with the use of cement pipes the place with fresh water, not the highly salty water that created the cliffs. And the walls have been painted to retain a shiny glow for the tourists. 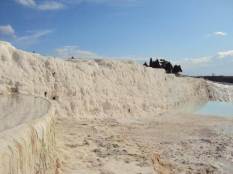 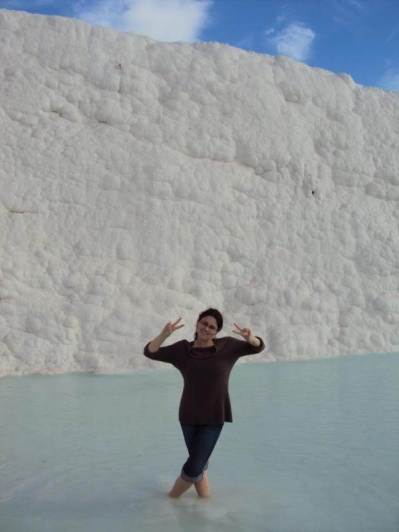 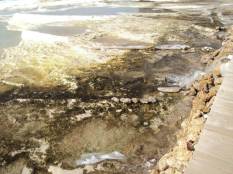 Since it was free we walked down into the pools, where the calcite is still naturally built up is neat. You can get good views of the cliffs that are dry and unaltered from down the constructed pools. It was a good experience and the ruins are worth the price of entry, the rest is a nice bonus. Over all worth a visit, but only for a day, take a bus to Denzalli in the afternoon and get while the getting is good.

The rain started then, so we went towards the south gate. We followed the board walk towards the south gate but the boardwalk ended. There was a semi-gravel path down the side of the cliffs. We walked down. As we went down we saw that there was a gate at the end. We were in an area that we should not be in, but it was no fenced off at the top. The gate at the bottom was open, and even if it had not been it would have been easy to go around. The gate opened on the outside of the entryway. To late to do anything about it now.

After we went back to the hostel to pack our bags and get a bus to Bodrum or Marmaris. We first had to get on a bus to the hub of Denzilli. From there we could only get a 5pm bus to Bodrum so that was where we went. The bus ride was 5 hours. We sat in a chai bar at the bus station. I was the only female in a large room full of men. Turkish men who kept staring at me because I was invading there sanctuary. The stares were worse once Adam left to look around.  No one knew what to make of the single white female, so completely out of place. I was a curiosity and not a threat so there we stares but I never had to feel threatened. It was a good place to pass a few hours.