Our bus for the two city tour was leaving at 8:10am. We set the alarm to go off at 7am. This would give us time to go and have breakfast and gather our things before we had to be on the bus. At breakfast I used the crepe station. With cinnamon, sugar and fresh fruit it was a very filling breakfast.

We headed up to the lobby at 8am and there were two buses waiting there. Amber asked on the front bus if it was headed on our tour. She was informed, quite rudely, by a passenger that it was a private tour. I can only imagine that it is different from our tour because it was one group that booked it. We asked again on the second bus if it was for us and received the same answer. I was surprised at how rude people could be when answering a simple question. I am glad I wasn’t on either of those buses, I don’t think I would have gotten along with the people on them.

Shortly after the other two buses left another one pulled up. This one had a man in a red Air Canada shirt step out and call for our tour. Our bus for sure. We were obviously the first pick up because there was no one else on the bus. After picking our seats we went from hotel to hotel picking up other people for the tour. In total there was about 30 of us.

Once the tour began we drove across a causeway that connected the island of Cayo Coco to the Cuban mainland. On either side of the causeway the shallow waters are a bird sanctuary. There were thousands of birds in the area, including a few flocks of pink flamingos. While we drove to Ciego de Avila, the capital of the region and the farthest point on the tour, we were given the history of Cuba from our tour guide. He was very engaging and informative.

We stopped along the way at a crocodile farm. Here we had an quick opportunity to feed the crocodiles and hold some of the young, as well as other animals, if we wanted. In exchange for this we would leave a small donation. 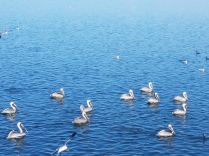 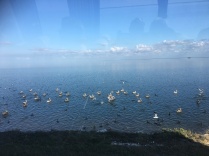 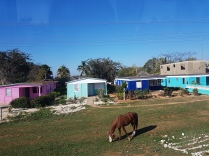 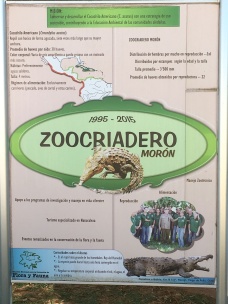 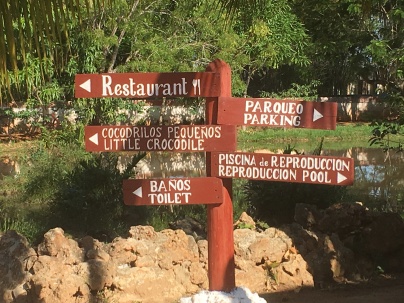 We were quickly hustled back on the bus after maybe 10 minutes. Along the way to Ciego de Avila we made another stop at a small hotel. They bring in to tourists by making a Piña Colada in “true cuban style”. This means using fresh coconut and pineapple rather then a store bought mix. A Piña Colada is better when made fresh. While we enjoyed our drinks a local band entertained us. They played some popular Cuban music. They also pulled some people up on stage to teach them how to do a few steps to a Cuban dance. As the band finished there music and we finished our drinks they were selling CDs of their music. I did not buy one and returned to the bus to finish our journey to Ciego de Avila.

Once we arrived in town we were dropped off at a local house that is also used as a studio and sells artworks. We were able to tour through the front of the house that acts as a shop, as well as through the house itself. This was to provide us with on idea of what the Cuban government provides for it’s people.

The Cuban government provides a house or apartment for each family, as well as a wage and food credit. These are not very much and people find other ways to supplement there incomes. Some have shops to sell things, some get jobs in well paying fields, some work at resorts for tips. Our guide told us this because in some of the cities you may see beggars. He wanted us to be aware that they have a house and a government allowance and we could choose to give to them or not.

After we finished at the art shop we continued down the road to another small shop. Here the people used their front room as a jewellery store. They made statues and jewellery out of old German silver silverware. We were even able to view the production area in the back. The entire family and some friends are involved in the process of making things to sell in the shop. Amber and I both bought a few things. Amber was excited because they would size rings to make them fit her fingers, something she usually has trouble with. While she was in the back the group was leaving. I was unsure how long she would be and how far the group would walk. I walked until I had both the shop and the group insight. This way if they turned a corner I would be able to see.

It didn’t take too long for Amber to have the rings sized and we met with the group as they headed into the town square. 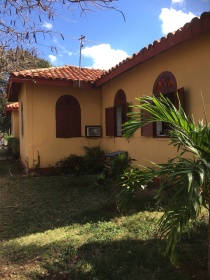 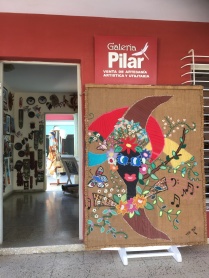 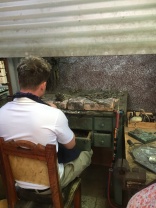 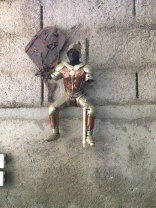 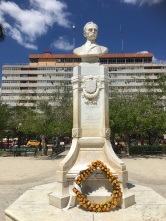 We walked through the town square and at the end of the walk we ended up at another shop. This once sold the more coveted of goods; coffee, rum, and cigars.

I knew this is where I would become weighed down with gifts for people. You are allowed by Canadian customs to bring back 1.4L of alcohol. Bottles of rum conveniently came in 700ml sizes. I brought home one for my brother and his girlfriend. I also brought one home for another friend. But I am holding it hostage for my cheese platter that I made. I also bought cigars for the only smoker I know. I made sure to get a Cohiba, which is the brand that Fidel Castro smoked. I also brought home a bag of coffee to give away.

With heavy bags and a light wallet, we went for lunch. This was done buffet style at a restaurant on the square. Lunch was similar to what we would have at the hotel, fresh grilled meat, some sides, and lots of fresh fruit.

After lunch we had about an hour of free time. Amber and I headed for the bank, I had spent all my cash. It was a quick and painless process to take out money at a teller. I recommend going to the teller, especially in Cuba, so that the ATM doesn’t eat your card. This would make for a very bad trip afterwords. Our tour guide warned us that ATM’s in Cuba still eat a lot of North American cards.

After the bank we walk along a pedestrian street and found a local market. This was interesting because the Cubans have two currencies. They have the Convertible Cuban Peso (CUC) that is par with the American Dollar and is used by tourists. They also have the Cuban Peso (CUP) that is used by the government and the people and is converted at a rate of 25:1. One CUC is equal to 25CUP.

In the market the goods were priced in CUP. I know this because the sandals that I wanted had a tag that said 100 on it. I wanted new sandals because my old flipflops had the strap attached by going through the plastic bottom. This meant they rubbed the bottom of my foot and caused blisters. I wanted a new pair that attached to the sides and didn’t rub. I found a cute pair and was able to buy them for only 4CUC. Cheaper then anything I would find at home.

After wandering around for the rest of our time we went to the area where we were meeting the bus. Now we were headed to Moron (pronounced with two long O sounds, not like an idiot, they were very sure to emphasize that point).

I’m not sure how long the bus ride was because I napped all the way to Moron.

When we arrived in Moron there was a horse and buggy tour waiting for us. We went around town and saw the sights, this didn’t take very long because Moron is a small town. We still had fun, our horse and driver liked to be at the front and would do what he could to pass others. The ride only took about 5 minutes, then we crossed the street and went into a bar to watch a live band.

While we were listening to the band Amber is texting on her phone, which was strange because it’s not really possible in Cuba. Turns out she was writing a note that she then passed to me. It said that I had “resting bitch face” and that I was her entertainment. I guess the others on the tour just thought I was unhappy, and I was, unhappy at being woken up.

After the band finished they were selling their CD for 10CUC. Again I did not buy one. We were then taken out the back of the bar because the courtyard had a few little tables set up with souvenirs for purchase. I bought a small wooden model of Cuba for myself. 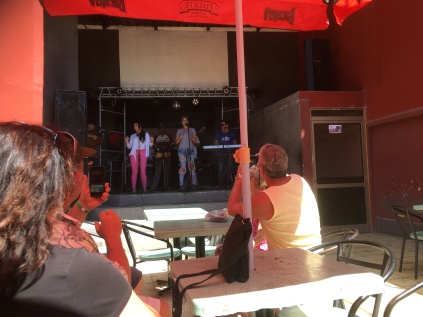 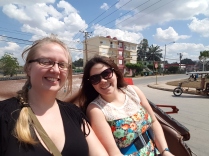 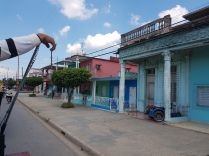 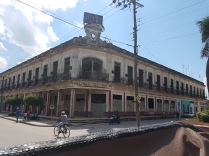 Then it was back on the bus to the mangrove lake. Here the water is red because of the mangrove wood and sap that has mixed with the water. We were put on two speed boats and taken across the lake. While you are driving it looks like you are headed towards a wall of trees but there is a small turn that the boat takes into a tunnel in the mangroves. Here you are able to see things closer.

The boat drivers know exactly where to stop to show people saw many natural plants. There was a wild orchid growing on one of the trees. There was snake cacti and termite mounds. There was a rope swing to swing out of the boat and back in. Don’t land it the water, there could be crocodiles waiting for you. I was a really nice drive. After we headed back to the shore to get on the bus and head back to the Hotels. 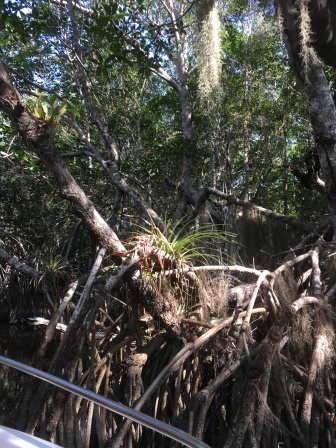 When we returned to the hotel it was just after 5pm. We had lots of time before our dinner reservations. We went to the room to drop off all the things we bought. Then it was down to the beach to catch the rest of the days sun.

We headed to the Italian restaurant for our 6:45 reservation. The building was nice and clean. It was divided into two restaurants on each side of a courtyard. Then the restaurant was in two sections to make it feel more intimate. The food was good but the portions were small, so if you go order from each page. Amber had a pizza and I had cannelloni with cauliflower.

After dinner we headed to the lobby to use up the remainder of the internet card. That didn’t take very long because we once again played the connect, not connect, re-connect. In the end we each got a few messages out. We sat around the lobby bar until 8:30. We both felt tired because of our long day in town.

We headed back to the room and I was out by 9pm. Couldn’t even stay awake until the nightly entertainment.